In this article we will figure out if it is possible to use a portable car jump starter as the welding current supply for the spot welder.

The car jump starter i bought for testing is the “Suaoki U10 Jump Starter” from Amazon.

What parts do we need

The jump starter comes with a “booster box”, a power supply for charging and the jump starter itself. I cut of the battery clips from the booster output and crimped on some cable shoes to connect it to the spot welder. One positive thing here: The high power connector on the jump starter is an EC5 type. This is a pretty common connector on RC stuff and easy to get on ebay for example. 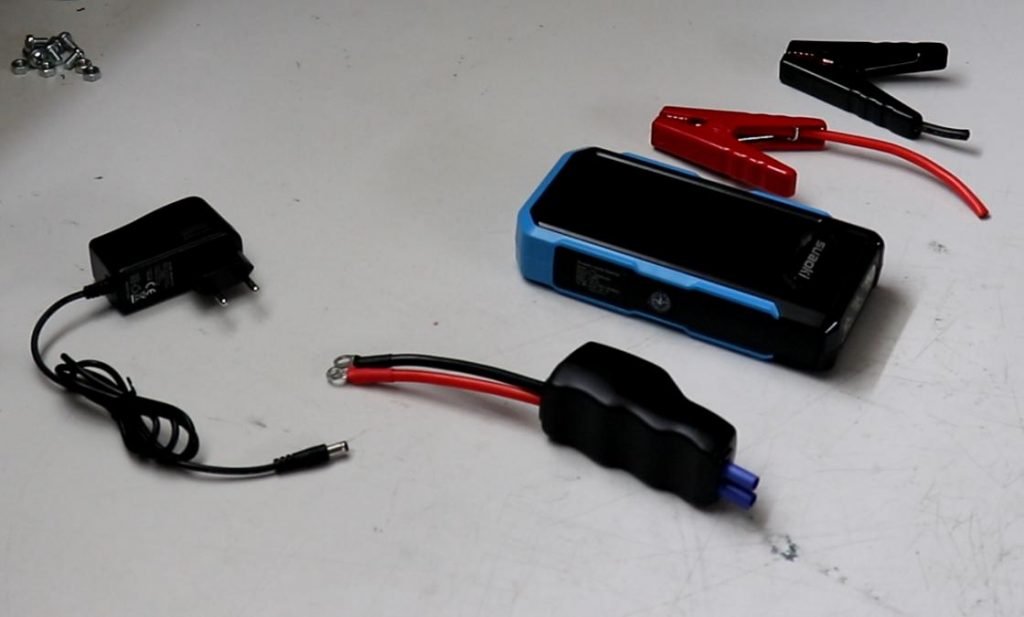 Connecting it to the Spot Welder

Now it was time to connect it to the Spot Welder. Negative cable to the Spot Welders U-shaped aluminum part and the positive cable to the fuse case. Then the “booster /protection” box is plugged into the jump starter. But even after turning on the jump starter there was no voltage at the spot welder. It turns out the “protection” box monitors the voltage at its output and only turns on if there is 12V attached. After some reading through the manual i found that the output can be forced to be turned on by pushing the little button in the booster box. Problem with this is that the output automatically turns of after 30s again. The spot welder works with it this way but turning it back on every 30s is not practical. 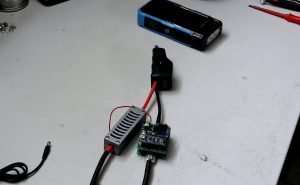 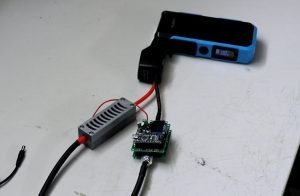 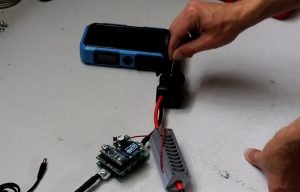 Taking a look inside the booster/protection box

By the shape of the box you could think there are some capacitors inside to help the jump starter deliver the high current peak. So i took it apart to see whats inside. Unfortunately there are no capacitors in there. Just some components for the protective functionality and to control the big relay that switches the output on and off. The relay is rated at 70A which could be a bit low for 800A current output of the jump starter. 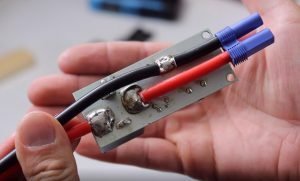 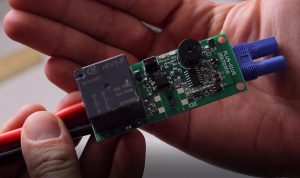 Connecting the jump starter directly to the Spot Welder 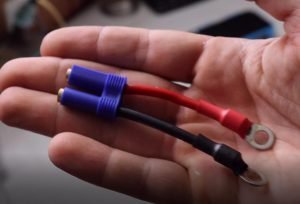 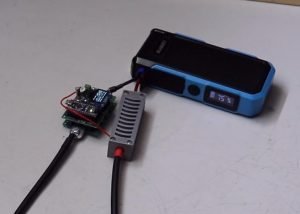 For testing i placed two pieces of 0.15mm nickel strip on top of each other on a piece of wood. This way testing is safe and if something goes wrong you just shoot a hole in the nickel strip. The result is pretty good. Measured weld current is arround 500A. Quite a bit lower than the advertised 800A current, but still strong enough to spot weld. It is also possible that the current gets limited a bit by my EC5 adapter. I had no thicker silicone wire on hand. With thicker wire the resistance may be a bit lower. 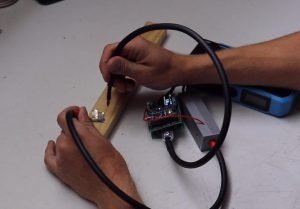 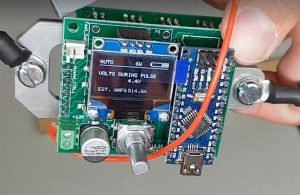 Whats inside the jump starter

Now that the welding capability was confirmed i was curious to see whats inside the jump starter. There seem to be many different approches on these devices. I have heard of jump starters that use mosfets or relays to switch the output. But this particular one does not switch the output on the jump starter itself. The EC5 connector is directly connected to a 3s 11,1V Lipo battery.  So the “only” safety feature is the relay in the external protection box.

The battery is labeled with 11.1V but no capacity. It is clearly a “normal” Lipo battery. I completely discharged and then charged it with my RC battery charger to find out it has 6000 mAh capacity. The size of the battery is pretty much exactley the same as the 5000mAh Turnigy NanoTech.

Some research in the manual showed that the 6000mAh fit pretty good with the 74Wh capacity on the product parameter page in the manual. I still dont know how they got to the 20000mAh capacity rating, but at least the 74Wh rating is honest.

Other than the battery there are just two pcbs inside the case. One has 3 leds on it that act as a flashlight and the main pcb has the USB and charging connection and the display on it. The battery is charged/balanced/monitored through its balancing connector from the main pcb. 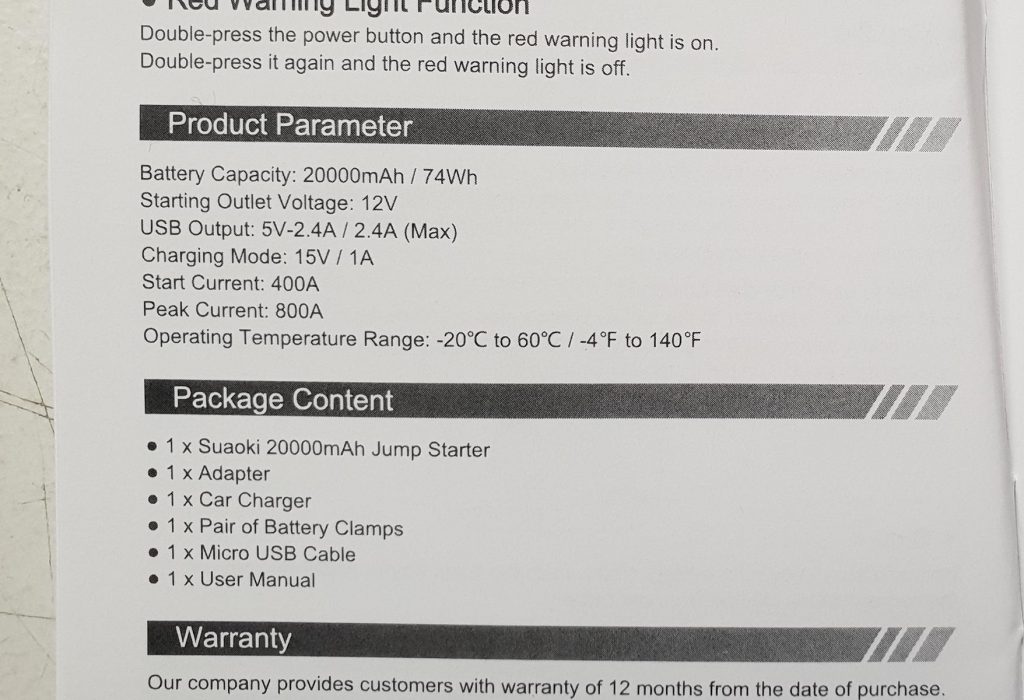 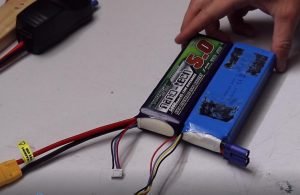 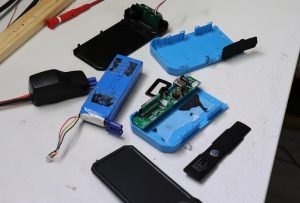 To see how the jump starter handles many welds in a row i modified the Spot Welder a bit so it automatically activates a pulse every 3 seconds. I then connected both welding tips to a piece of brass rod to simulate the nickel strip. The pulse time was set to 10mS. As you can see the battery temperature rised up pretty high even with the jump starters case open. After about 400 welds it reached arround 50°C celsius. I then gave it a little 5 minute brake and started again. After 800 welds total i stopped the test because the battery temperature reached 60° celsius. This is the maximum working temperature a lipo should be used at. At higher temperatures the internal chemistry of the lipo will start to get damaged which will decrease the lifetime of the lipo. The 800 welds at 10mS pulse time took 3100mAh out of the battery. 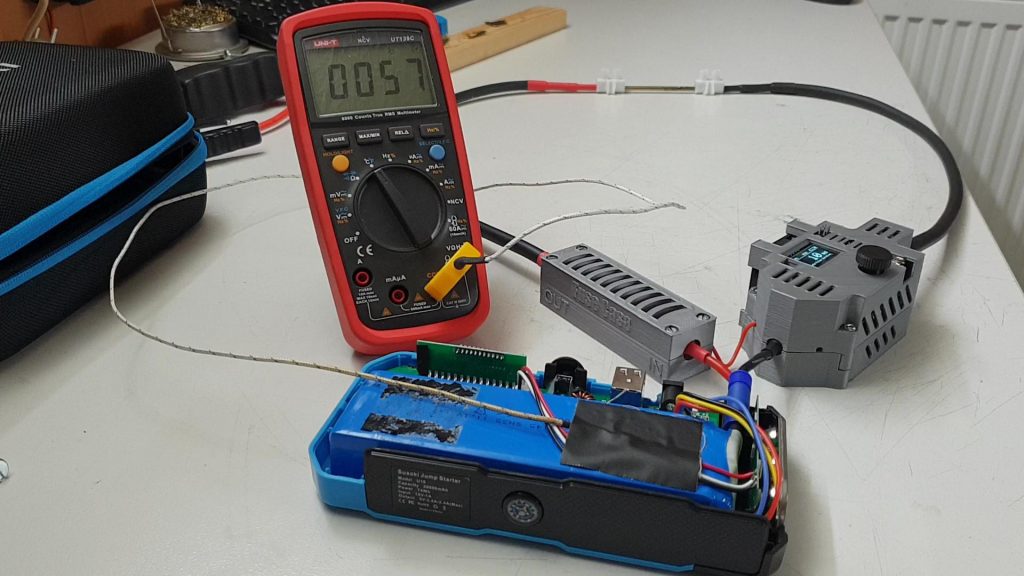 All in all the build quality of this jump starter is pretty good. If you are only going to build small batteries with a few hundred (arround 300 – 400) weld spots at a time it is a good alternative. For building big batteries with thousands of welds i would still recommend to use a standard car battery to power the welder.